Ten years after Earth’s electronics were fried by an immense solar flare, most human technology has turned useless and civilization has begun to fail. But one thriving pocket is a valley on California’s coast, where farmers in a religious cult dwell. A tribe of local hunters protect them. But this arrangement gets upended when a young refugee, Kyle Skander, wrecks his kayak there as he seeks to paddle north to Arcata. Kyle finds himself accused of murdering a young woman from the commune. To win freedom, he must find the real killer. His combative personality and a background in logic and philosophy helps Kyle make headway at this task. His investigation begins to uncover the valley’s deepest secrets. Then, buried rivalries erupt into a battle that alters forever this enclave’s fate. “Came A Horseman” re-imagines the Western as a post-apocalyptic adventure, with a murder mystery at the heart of its plot. 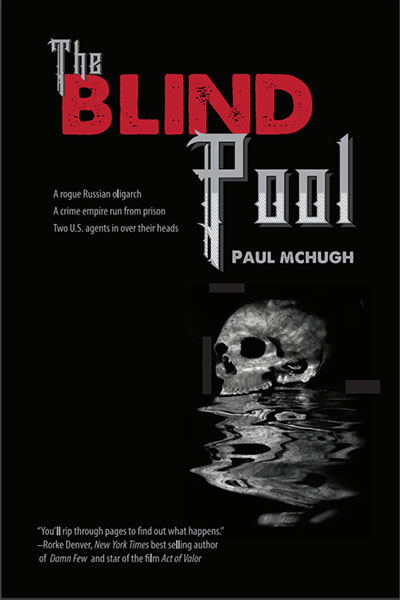 The nation is being invaded. One giveaway is a simple tattoo on a thug’s middle finger. That clue proves strong enough to direct military vets and investigative partners Dan and Carl to the heart of a global conspiracy. Carl is an undercover FBI agent; his friend Dan operates on the law’s shadier side. Neither have seen a crime ring as malevolent as the Blind Pool, designed to exploit the talents of nefarious felons held in prisons around the world. This conspiracy recognizes its members via a tattoo on the hand, plus an embedded microbead. Its overlord, Leonid Andreyev, a rogue Russian oligarch, controls billions in laundered cash through his off-the-books enterprises. Andreyev’s point of attack on the U.S. is a prison in Texas, run by its sadistic owner, Mark Nader. As Carl and Dan unravel a murderous puzzle, their lovers, Melanie and Linda, also get sucked into that dark maelstrom. As their joint peril rises, safety lies only in bonds of trust between these four friends. However, once snared by strong undercurrents of The Blind Pool, they discover such links can either be bolstered… or betrayed.